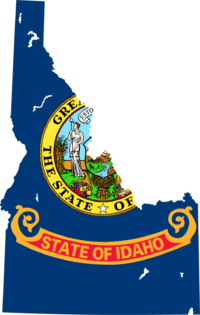 **WARNING**
It is extremely important that if you obtain an Idaho concealed weapon license,
you must be aware of all the current laws and requirements of this state.
An Idaho license does not supersede any other state's laws or requirements.

This page will only cover the "Enhanced" Concealed Weapon License (CWL). Obtaining it will allow a Utah resident to carry a concealed firearm in Minnesota and New Mexico.

* Idaho Code provides that the sheriff may collect any additional fees necessary to cover the cost of processing fingerprints lawfully required by any state or federal agency or department, and the cost of materials for the license lawfully required by any state agency or department, which costs shall be paid to the state. Different Sheriff's are reporting different costs.

18-3302K.
(4)(b) Has successfully completed within twelve (12) months immediately preceding filing an application, a qualifying handgun course as specified in this paragraph and taught by a certified instructor.
(i)  The course instructor is certified by the national rifle association, or by another nationally recognized organization that customarily certifies firearms instructors, as an instructor in personal protection with handguns, or the course instructor is certified by the Idaho peace officers standards and training council as a firearms instructor;
(ii)  The course is at least eight (8) hours in duration;
(iii)  The course is taught face to face and not by electronic or other means; and
(iv) The course includes instruction in:
1. Idaho law relating to firearms and the use of deadly force, provided that such instruction is delivered by either of the following whose name and credential shall appear on the certificate:
(A) An active licensed member of the Idaho state bar; or
(B) A law enforcement officer who possesses an intermediate or higher Idaho peace officers standards and training certificate.
2. The basic concepts of the safe and responsible use of handguns;
3. Self-defense principles; and
4. Live fire training including the firing of at least ninety-eight (98) rounds by the student.

Cost depends on the location of the class and how much the instructor charges.

Where To Take the Required Training

Training must be completed by an instructor authorized to teach any of the 'Familiarity with firearms'  courses listed above.

The same application form is used for both the Basic and Enhanced License.
License Application
Training Certification Form
Read the instructions carefully before filling out the application. You may be required by other Sheriff's to appear at their office to obtain an application or mail you one that you could mail back.

What Must Accompany the Application

Where To Take The Application

The application process and fees are the same for the Basic and Enhanced license.
The sheriff must issue the permit within ninety days of the filing of an application by a person, over 21, who is not disqualified from possessing or receiving a firearm under state or federal law.

For FAQ's or to find out more information click here to view the Twin Falls County Sheriff's Office website.