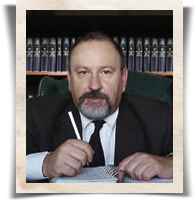 James D. “Mitch” Vilos is a graduate of Utah State University and the J. Reuben Clark Law School at Brigham Young University. He has been in practice since 1978, practicing in both Utah and Alabama. Mr. Vilos’ law practice focuses on primarily two areas of law, representing accident victims and handling criminal cases involving self-defense and weapons charges.

Personal Injury Law
Mitch’s practice focuses on auto-accident cases, semi-truck accidents and motorcycle accidents with an emphasis on serious, permanent injuries, disability or disfigurement. He has been nominated by his peers, (attorneys and judges) as one of Utah’s Top Lawyers for 2008, 2009, and 2011 as reported in Utah Business Magazine. More on Mitch’s personal injury practice.

Weapons Law
Mitch’s success as a personal injury lawyer has allowed him to delve into a unique area of the law in which he has an interest and passion – weapons law. He has successfully defended gun owners and gun dealers in several different states. More on Mitch’s expertise in Weapons Law.