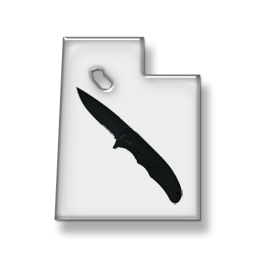 It is LEGAL to own and carry any type of knife in the State of Utah as long as you are not a restricted person as defined in 76-10-503.
Legal knives include a butterfly knife, dirk, dagger, stiletto, bowie knife, automatic*, gravity*, switchblade* or a disguised knife (in a belt buckle, necklace, etc.)
* See Federal restrictions below.

Bowie Knife
Is essentially a heavy dagger with a pointed, straight 12-20 inch blade. The "toothpick" is balanced and weighted for throwing and can also be used for thrusting .
The historical Bowie knife was not a single design, but was a series of knives improved several times by Jim Bowie over the years. The version most
commonly known as the historical Bowie knife was rather large and of massive construction, as knives go, usually having a blade of at least 6" (15cm)
in length, some reaching 12 inches (30cm) or more, with a relatively broad blade that was an inch and a half to two inches wide (4 to 5 cm) and made of steel

Pen Knife
A small folding pocket knife, originally used for cutting a quill to make a pen nib. It may have single or multiple blades and additional tools
incorporated into the design. Over the last hundred years there has been a proliferation of multi-function knives with multifarious and often ingenious
gadgets including awls, reamers, scissors, nail files, corkscrews, tweezers, toothpicks and so on, and the tradition continues with the incorporation of modern devices such as ballpoint pens, LED torches and USB flash drives. The most famous example of a multi-function knife is the Swiss Army knife, some versions of which number dozens of functions and are really more of a folding multi-tool, incorporating a blade or two, than a penknife with extras.

Gravity Knife
A knife which can be opened solely by the forces of gravity or centripetal force. One method of opening is where the blade exits out the front
of the handle point-first and locks into place. Another form is like a switchblade, but instead of a button or spring, the knife is "flipped" out of the handle, and locked into place. To retract the blade back into the handle, a release lever, or linerlock is pressed. Should the knife be equipped with a spring to open the blade, it is then referred to as an Out-The-Front Automatic (OTF) knife, or a switchblade if it exits out of the side. Knives commonly mistaken for gravity knives include OTF automatic knives, the switchblade and the butterfly knife (or balisong), and occasionally common folding knives (see penny knife).

Clasp Knife
A folding knife, strictly speaking one equipped with some means of holding the blade in the open position when in use, so that it cannot close
accidentally on the user's fingers. The term tends to refer to a medium-sized to large knife, and implies a locking mechanism such as a twisting ring or catch that must be released in a distinct action before the knife can be folded, as opposed to the more usual sliding spring which requires only that a sufficient force be applied to the back of the knife in order for it to fold into the handle, and for which the term penknife is normally used. The term lock-knife or lockback knife also exists to make this distinction.

Dirk
A Scots word for a long dagger; sometimes a cut-down sword blade mounted on a dagger hilt, rather than a knife blade. Dirks were made with either
double-edged or single-edged blades, and there was no standard blade configuration. Reference books covering naval dirks invariably show the popularity catch an opponent's blade, a concept borrowed from the medieval Scottish dirk, and also often had an upper guard that bent forward at an angle, also intended to catch an opponent's blade. The back edge of the curved clip point, also called the "false edge," was often sharpened in order to allow someone trained in European techniques of saber fencing to execute the maneuver called the "back cut" or "back slash." A brass quillon was attached to protect the hand, usually cast in a mold.
It is likely that the blade shape was derived from the Spanish Navajo clasp knives carried in Spain and the Spanish colonies in the Americas.

Butterfly Knife / Balisong
The Balisong, called a Butterfly knife in the West, and sometimes known as a Batangas knife, is a form of folding pocket knife with two handles that
counter-rotate around the tang such that, when closed, the blade is concealed within grooves in the handles. In the hands of a trained user, the knife blade can be brought forth quickly using one hand. Manipulations (flipping) are performed for art or amusement and require great skill. Translated from Tagalog, the word "Balisong" means "Broken Horn" (literally, "baling sungay") as the original Balisongs were made from carved animal horns and recycled knife blades. The name butterfly knife is a term coined in the United States much like "drumbox" for the kahon.

Jack Knife
A large clasp knife. To fold or double. A large knife with one or more folding blades.

Stiletto
a. A small dagger with a slender, tapering blade.
b. Something shaped like such a dagger.

Switchblade
There are two basic types of switchblade: Side-Opening and Out-The-Front (OTF).
1. A side-opening knife's blade pivots out of the side of the handle (in the same manner as an ordinary folding knife).
2. An OTF knife's blade slides directly forward, out of the tip of the handle.
There are two types of OTF knives: Double Action and Single Action.
• Double Action OTFs allow the user to extend or retract the blade with the press of a sliding button. Spring tension in these knives is actually provided by the movement of the button, which makes them much safer to carry since they will not open accidentally. However, the extra force the spring requires can also make intentional opening more difficult.
• Single Action OTFs require the user to retract the blade manually and compress the spring. Because they often use a lever to compress the spring, stronger springs can be used. This makes them open more vigorously than the double-action type, and allows them to achieve tighter lock-up.

17B-1-103.  Local district status and powers -- Registration as a limited purpose entity.
(7) (a) As used in this Subsection (7), "knife" means a cutting instrument that includes a sharpened or pointed blade.
(b) The authority to regulate a knife is reserved to the state except where the Legislature specifically delegates responsibility to a local district.
(c) Unless specifically authorized by the Legislature by statute, a local district may not adopt or enforce a regulation or rule pertaining to a knife.

U.S.C. §15-29-1241. Definitions
As used in this chapter -
(a) The term ''interstate commerce'' means commerce between any State, Territory, possession of the United States, or the District of Columbia, and any place outside thereof.
(b) The term ''switchblade knife'' means any knife having a blade which opens automatically -
(1) by hand pressure applied to a button or other device in the handle of the knife, or
(2) by operation of inertia, gravity, or both.

U.S.C. §15-29- 1243. Manufacture, sale, or possession within specific jurisdictions; penalty
Whoever, within any Territory or possession of the United States, within Indian country (as defined in section 1151 of title 18), or within the special maritime and territorial jurisdiction of the United States (as defined in section 7 of title 18), manufactures, sells, or possesses any switchblade knife, shall be fined not more than $2,000 or imprisoned not more than five years, or both.

U.S.C. §15-29- 1244. Exceptions
Sections 1242 and 1243 of this title shall not apply to -
(1) any common carrier or contract carrier, with respect to any switchblade knife shipped, transported, or delivered for shipment in interstate commerce in the ordinary course of business;
(2) the manufacture, sale, transportation, distribution, possession, or introduction into interstate commerce, of switchblade knives pursuant to contract with the Armed Forces;
(3) the Armed Forces or any member or employee thereof acting in the performance of his duty; or
(4) the possession, and transportation upon his person, of any switchblade knife with a blade three inches or less in length by any individual who has only one arm.